With projects such as the Villanueva Solar plant currently producing 427 megawatts of energy and the Don José Solar Farm, completed in May 2018 and producing 238 megawatts, solar power has become big business in Mexico. Solar panels are popping up all over our city and across Mexico as businesses and home owners reap extra cash savings every month from their photovoltaic investments.

Unfortunately, Mexico is also a leader in another area. Kidnapping and drug trafficking business in Mexico is booming. Every two hours a person is abducted in Mexico and only Syria has more kidnappings in the entire world. Gangs of drug traffickers use disappearance of their fellow citizens as a way to force social control over a fearful local populace.

According to Maria Elena Salazar “In Coahuila alone, authorities have 120,000 human remains and only 20 of them have been properly identified,” Grace Fernandez of FUNDEC told a DW reporter. “There is a lack of means and trained professionals to carry them out, as the labs are currently overrun.” At the moment there are over 37,000 missing persons in Mexico. Hundreds of bodies have been unearthed of burnt human remains scattered across various regions of Mexico, a feature of organized crime’s disposal methods that are meant to leave no trace.

A solar panel installation crew working in Northern Sonora Mexico was taken hostage recently by a ranch owner who had contracted for a solar panel upgrade to his business.

Previously, the ranch owner had sent his daughter to approach the local solar installation company in October of 2018 requesting a quotation for the solar equipment and installation services.

“We went their knowing the risks of doing installations in this particular town. There are a lot of active Marijuana growers in this area and we always try to be cautious,” said Mr. Williamson

Mark Williamson, a California native, came to Hermosillo and founded SolarSnap with 3 partners in 2013 after exploring northern Mexico on a mountain bicycle.

“I love this area. I think life is generally good in Mexico. You have to take a little bit of the bad with the good.”

The hillsides and rolling, green terrain of this region of Mexico makes for ideal growing conditions for the marijuana plant. The money earned from sales of illegal drugs in the United States goes mostly into the local communities, providing jobs and a higher standard of living. This makes it difficult to combat narco-traffickers because many communities in Mexico suffer from adverse poverty.

The kidnapping ordeal began at approximately 2:30 pm local time in the colonia, San Francisco just outside of San Pedro in northern Hermosillo on the 6th of December, 2018.

“We had suffered great losses during the installation and had trouble accounting for the solar panels and other materials that we had delivered to the work site. Things were disappearing overnight.”

The dispute between SolarSnap and the ranch owner came to a head a few days prior when Mr. Williamson confronted the ranch owner. Apparently, Mr. Williamson wished to access security cameras to review video evidence contained within the central office of the compound. “We just wanted to look at the cameras and see if we could find something to help us locate our missing solar equipment. The Gamez family said no.”

Mr. Gamez then became agitated and ordered the workers working on the site detained.

Without warning a large metal gate that had admitted the 2 workers and their vehicle a few hours earlier was closed and locked. The two workers suddenly found themselves imprisoned with their work van within the remote compound. Two large Weimaraner attack dogs were then released into the high fenced area where the workers had been doing their jobs. 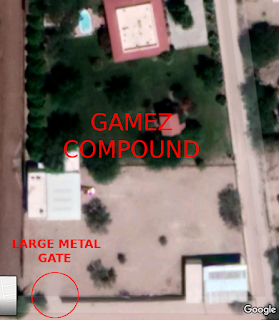 “We heard the tall metal door slam shut and looked all around. The gate where we had come in had been locked and all that we saw was high walls with barbed wire on top. We then looked at each other. Apparently, our negotiations for video surveillance information had failed,” said Mr. Williamson.

The ranch owner accompanied by one daughter then exited the main office and approached the trapped SolarSnap workers, which included Mr. Williamson. One thug took up a post in front of the locked main gate.

Mr. Gamez with his daughter Magda then explained to the workers that he wished for the workers to continue working as his guest until the job was completed. Upon protest by Mr. Williamson, Mr. Gamez offered the alternative solution of refunding his total investment in the project.

“That’s when I became frightened because I knew that I was the only one who could really help us fulfill on the ransom demands. The factory was an hour away, and our lives had just become equated to a delivery of a 45 panel solar installation or a large sum of money. I had heard many stories about other kidnappings in Mexico. I knew a neighbor who’s wife and daughter were kidnapped for ransom. I never thought that it would happen to me,” said Mr. Williamson.

Mr. Gamez and his daughter then withdrew back to the main office and left the workers to somehow conjure the solar equipment or money required for their release. Cell phones coverage was spotty at the remote compound, and they struggled to contact the store.

In Mexico local police response is very slow, and often times never. The Gamez ranch was apparently well known to police who would not go there. There was no easy way to contact the military. The workers were stuck and the sun was going down. The reality that the workers may have to spend the night in the compound began to sink in.

“I wondered how many days would pass before they would get tired of feeding us and then just kills us. It was a terrible feeling,” said Mr. Williamson 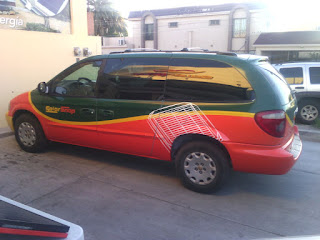 Mr. Williamson remembered that their work vehicle had self contained electrical service on board and the ability to run power tools. When the guard temporarily left his post to take a break, Mr. Williamson made his move. He quietly started the van and rolled it carefully toward the 3 meter tall, solid metal gate. He then gently lifted the hood to plug in the A/C power to run the electric grinder. He then moved toward the locked gate to begin cutting the lock off to get free.

The grinder had barely come to life when the Gamez thug, Guadalupe Grijalva, began charging across the compound shouting at the solar installers. He ordered Mr. Williamson to turn off the metal cutting equipment and picked up a large rock as if to smash their heads.

“I did not want things to get bloody, and we knew that we were out numbered 5 to 1. I am sure that they had other weapons such as guns, so I turned off the grinder and returned it to the work vehicle.” Mr. Grijalva told the workers that they were not going anywhere and slammed shut the hood of their vehicle.

“It was late in the day and being caught after dark at this ranch would probably mean that we would be locked inside a building, perhaps in one of the large refrigeration/storage units in the main building. I did not want to let that happen, so I began shouting. I wanted them to hear me before the workers went home for the day,” stated Mr. Williamson.

He began shouting and demanding that someone contact the United States embassy and yelling “kidnap”, “kidnap”, “kidnap” so the other workers could clearly hear him. Mr. Gamez again emerged from his office looking quite cross. He told Mr. Williamson to shut up and began pointing his finger at him while shouting back.

Mr. Williamson then handed his cell phone to Mr. Gamez. “I told him that I had called a policeman and that he wanted to speak to you.”

Gamez and the policeman exchanged words for several minutes before Gamez handed the telephone back to Mr. Williamson and laughed. Gamez then shot back that he could care less about a metro police officer from Hermosillo. 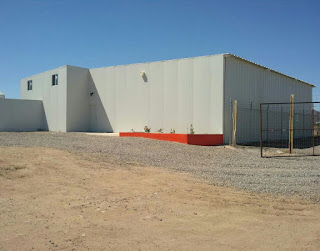 Mr. Williamson then stated that he had access to the solar inventory stored in the factory. Gamez turned to listen.

Mr. Williamson then convinced Gamez that he would allow them access to the solar products inventory on the condition that Gamez could follow behind in his truck. When they arrived he could choose whatever he wished. Mr. Williamson explained that they had a large assortment of interesting alternative energy equipment and that Mr. Gamez would be quite pleased.

A short while later daughter Magda went for the key and handed it to Guadalupe. The large metal gate that had imprisoned the workers was unlocked and the frightened but relieved workers drove slowly out onto the dirt road that lead to freedom followed closely by the red pickup truck belonging to Gamez, who was eager to return home with new solar gadgets and other alternative energy treasures.

While driving the SolarSnap vehicle, Mr. Williamson made other plans. “We had already lost too much money on this job. Allowing these pirates free access to our factory facility in the dark with no backup sounded like a risky proposition. What if our inventory did not satisfy them? What if they tried to kidnap us again? Would they try and take over our factory?” 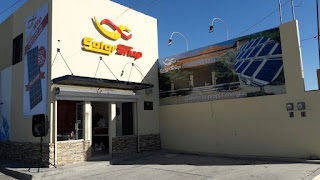 Mr. Williamson called the store, told them to notify the police that they were on their way and then ordered the store vacated and locked.

“I told them to pull the steal curtain down and that everyone should get away from the store. I did not want them taking any female prisoners.” said Mr. Williamson.

The crew then drove to the store followed by Gamez in his large pickup truck. Mr. Williamson parked in the parking lot of his San Benito store, a neighborhood of Hermosillo, and explained through Gamez’ open window that he needed to stop there to get the keys to open the factory. This was an effort to stall them and to keep them there in the prayer that the police would respond to their pleas for a rescue. They managed to keep them there for 20 minutes, but the police never arrived.

Mr. Williamson then told Gamez that they would press onto the factory, but instead drove directly to the Matamoros police station in central Hermosillo.

As soon as we arrived at the police station, Gamez became angry. He began cursing the SolarSnap workers. However, no one would assist Mr. Williamson at the Matamoros police station. The Hermosillo police refuse to take a kidnapping report against, Gamez.

“Gamez eventually left us alone when we refused to leave the police station. But he came back a few days later with two friends and tried to force their way into our Hermosillo store. They surrounded the store and cut the power. We again called the police. The police came out finally, but then harassed the store workers, asking for our ID and then refusing to even question Gamez. It is a little bit of a mess down here in Mexico with the police and people like Gamez. It is not always fair.”

“It is my dream to bring electrical power to the remote villages and towns of Mexico and the United States. Unfortunately, we all feel the crushing boot of those who sell to the Americans who buy illegal drugs from Mexico and the social ripples that this causes down here. I wish that Americans truly wanted to do something about drug trafficking between the United States and Mexico and to stop buying illegal drugs from Mexico,” stated Mr. Williamson.

Commenting for this entry is disabled.